JKL
CD Available on Amazon
Vinyl on Amazon or bandcamp 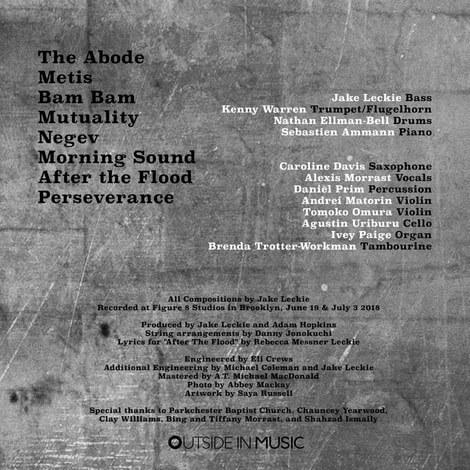 ​"The Boston-born bassist's recording locates itself solidly within the acoustic jazz tradition yet never sounds less than current, its broad stylistic scope reflective of his 'polyphonic openness to anything and everything.'" - Textura

"it doesn’t matter whether Jake Leckie runs with an old-school or new-school approach, the result is a warm sound crackling with life." - Dave Sumner Bird is the Worm Album of the Day

"Leckie leaps in and goes to town on bass—a jazz star is surely born. " - Chris Mosey, 4.5/5 Stars, All About Jazz

"...his bass is strong and robust with a resonant rounded sound."  - Brian Homer, UK Vibe

“This is not so much about the problem of restricting emigration to the country … but about human migration in a broader sense. After all, Leckie himself, who changed one coast to another - is a migrant, and because a good half of the members of this album living today in New York were born outside the States…” - Leonid Auskern, Jazz Square

"It is in the opening seconds of this song that we hear the string quartet arrangement... which, untypical for the modern jazz album, immediately raises the eyebrows and thus attracts a stronger appreciation for everything that will follow in the next three quarters of an hour."  - Ivan Laic, Ravno do DNA Magazin Pop Kulture

“Strings on jazz records often feel like an afterthought.  On Jake Leckie’s The Abode, they are integral to the compositions.” - Brian Krock, composer/bandleader of Big Heart Machine

"His composition “Negev” is one of my favorites. In the liner notes, we’re told it is inspired by Abraham’s journey through the Negev desert after he was banished from Egypt. This tune moves at a straight-ahead, up-tempo pace with Leckie pumping his bass like a heartbeat."  - Dee Dee McNeil, Musical Memoirs

"The last song "Perseverance" also has spiritual connotations and completes this very tasty and receptive album that certainly proves that in the future the eyes of the jazz world will be directed to the name and work of Jake Leckie." - Ivan Laic, Ravno do DNA Magazin Pop Kulture

"The Abode is a really strong debut from Jake Leckie – very listenable and accessible with a very high standard of musicianship – now who will book the band for a UK tour?" - Brian Homer, UK Vibe

"High octane throughout, there's just as much steak here as there is sizzle." - Midwest Record